The tenant who’s check bounced contacted me today. As I thought, they was out for the long weekend. He said there was enough money in the account and it shouldn’t have bounced. He was quite surprized when I told him that I had personally gone to the bank with his check and they told me he was broke.[well they didn’t say that exactly, but it means the same thing]

Anyway I’m stopping by the bank tomorrow and if they claim he’s short again i’ll have them call the tenants and figure it out there and then. But a tenant who’s pro-active about following up when the landlord calls is a slightly better quality of tenant!

Incidentally, Washington Mutual now looks like a Starbucks. I hadn’t been in one for 2 years and I was amazed at the transformation. I tried looking for a picture of the insides but I found this image at Tee Commerce instead. Much more fun! 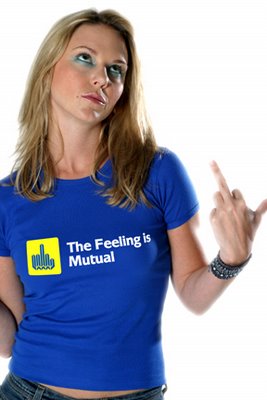