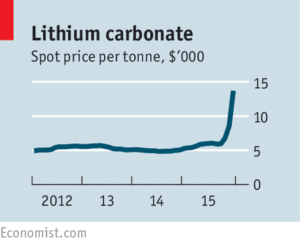 In a previous post on WCI, I had mentioned that I had sold some March 2007 Calls.

When you sell a call and you own the underlying stock, its called selling (or writing) covered calls. In my case, where I don’t own the underlying stock, its called selling naked calls. I gave someone the right to purchase a stock from me at a certain price at a certain date in the future and in return I collected a small premium. [That’s right, I don’t own the stock yet I sold the option on it and collected some money. Makes me feel like I’m in the insurance biz!]

There is unlimited risk in selling naked calls (or puts). If the stock rises beyond my strike price [which is $17.50 in the case of WCI] I stand to lose the amount that it rises minus 17.50 minus the premium I collected up front.

When I entered the position last Friday, the stock was trading around $15. So it would have to jump 16.5% before being “in-the-money”. I collected a premium of $1.45 per share or $145 per contract. So the stock would have to be over $18.95 before I would start losing money. If the stock closes below $17.50 on expiration, the option expires worthless and I keep all the collected premium. If however it closes at say $18, then I don’t have to buy the stock at $18 and deliver it to the buyer. I just close the position before then and pay him the difference of $0.50 per share or $50 per contract. So even though the stock closed above $17.50, I’d still make $145-$50 = $95 per contract.

There are also commissions to be factored in. Interactive Brokers is amongst the cheapest[and most difficult to use] and charges $0.75 per contract.

The stock was down 4.5% today on no news so hopefully it’ll continue its slide into BK. The puts I had bought last month are now up 22%!!! The calls I sold on Friday have decreased in value and if I wanted to, I could close my position by buying them back at $1.25 per share or a 13.75% profit per contract.

I also sold some naked puts on a junior mining stock. I think it might move higher in the near future, however I don’t have any money to invest right now, and I’m not a big fan of buying on margin. Its trading at $11.25/share so buying 500 shares would run me around $5625. So I sold some puts with the Nov 06 expiration at $10 strike price and collected $35 per contract. The options expire in about 3 weeks. If the stock does nothing, I keep the premium. If it goes up, I still made my premium on them. If it drops, it would have to drop nearly 14% before I start losing money. But I was willing to buy them at this price anyway, so at least I curtailed my loss upfront!

[NOTE] Naked Option trading involves significant risk of capital. Victor Niederhoffer, a UC, Berkley professor and hedge fund manager lost 20 years worth of profits in 1 year through over-leveraging in naked option trades. Only gamble with risk capital when selling naked options. This is an extreme form of gambling. Do not take it lightly!