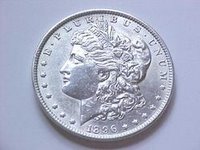 I got my first Morgan Silver Dollar today. Morgans are beautiful, large and allegedly the most popular collectible coin in the US today. This particular specimen was minted in 1896 making around a 110 years old. Its in pretty good condition for a coin of that age. Considering I only paid $21 for it, I’d say its a great deal too! 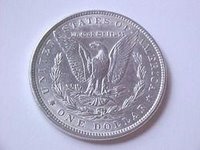 It has the liberty face on one side and an eagle on the other. Because of the eagles’ somewhat scrawny appearance, they used to be called buzzards! Its called the Morgan after the dude who designed the coin.