In case you haven’t heard, Congress will soon implement a “Cash For Clunkers” program. If you trade in your old car, you’ll get $3,500 towards the lease or purchase of a new one. If you have an old SUV you’ll get $4,500. Seems like a good plan doesn’t it?

Yesterday I had a short phone call with Bob Meigan, VP of TurboTax and we discussed the short-comings of this program. First of all, your car has to be a clunker. That is it shouldn’t be worth more than $3,500 since you won’t get anything extra if it is worth more.  By law, the dealer will have to scrap the car so even if its worth $5,000 he’s not going to give you a dime more than the $3,500 he’s getting from the goverment.

So basically you need to be driving something like a  salvaged car that you’ll trade in for a brand new one. Secondly, the salvaged car needs to be getting 18 miles or less ( I think its 16 for the SUVs) according to the EPA sticker when you first bought it.

Don’t you think that people who are driving around worthless junk with terrible gas mileage are doing it becauase they can’t afford a nicer car? Do you think a $3,500 incentive will enable them to afford a new car? The incentive is probaly worth only $70/month over a 5 year period on a car loan – I’m pretty sure you’ll need to come up with the rest.

And in order to prevent people from gaming the system and buying salvage car for a thousand dollars and using them to get a bigger discount, the plan enforces that you must have owned the car for a year. (And the promotion only runs from July to November 2009).

So probably the only people who will be able to use this program are students who were driving around clunkers and now having found jobs despite the tough economy are looking to upgrade. However, these people would’ve bought cars anyway, so there’s no real stimulus to the economy or the car companies. Just another waste of time and money.

However, if you are in the market for a new car, remember you can deduct the sales tax this year.

India’s Tata Motors just unveiled its 100,000 rupee car today. According to today’s exchange rate, that works out to $2,551 which makes it the world’s cheapest car. Its a small car, with a 624 cc engine and seats 4 adults comfortably. (If you’ve ever sat in a rickshaw, you’d have a slightly lower standard of comfort).

This is good news of hundreds of millions of Indians who currently drive scooters and motorbikes and can now afford a car. The Nano costs about twice as much as a mid-range bike does. So you can expect it to wildly popular, especially in India and South East Asia.

Even though its very fuel efficient, at 76 miles/gallon in the petrol version (diesel version is expected to give you 92 miles/gallon) compared to the 195 miles/gallon you’d get from a scooter (& more from some bikes), its a rather large step down. This means that India’s consumption of oil is set to increase.

The standard of living for millions of Asians has been increasing dramatically over the past few years. The per capita consumption of oil is going to rise significantly as these people buy more cars and goods. If you believe that we’re at peak oil production already, this means that there is going to be a severe shortage of oil over the next years, which should lead to higher prices. Higher oil prices led to higher inflation.

According to Bloomberg, option traders are speculating that oil will hit $200/barrel in a year. While I think this is a long-shot, oil prices are likely to keep heading higher.

Oil is currently trading around $100/barrel. Why oil at the pump costs the same as when oil was $60/barrel is a bit of a mystery. Maybe the upcoming election has something to do with it? I really don’t have a clue. But so long as my Canadian Income Funds keep producing, I’m happy!

Click here for deals on a used bmw or used japanese cars.

According to an article in the Wall Street Journal, the rush to produce ethanol has resulted in sharply higher prices for corn. Corn is used to feed cattle and pigs and as a result of the price increase, farmers are feeding their pigs trail mix, candy and Top Ramen noodles!

In Pennsylvania, farmers are turning to candy bars and snack foods because of the many food manufacturers nearby. Hershey Co. sells farmers waste cocoa and the trimmings from wafers that go into its Kit Kat bars. At Nissin Foods, maker of Top Ramen and Cup Noodles, farmers drive to a Lancaster, Pa., factory and load up on scraps of the squiggly dried noodles, which pile up in bins beneath the assembly line. Hiroshi Kika, a senior manager at the company, says the farm business is “very minor” but helps the company’s effort to “do anything to recycle.”

Mr. Smith says he’s paying about $63 to feed a single pig for five or six months before it goes to market — up 13% from last year. His costs would be even higher if he didn’t augment his feed with trail mix, which he says helps him save on average about $8 a ton on feed. This year, Mr. Smith has bought enough trail mix to feed about 5,000 hogs, and that will save him about $40,000.

Its only a matter of time before corn prices become too expensive for human consumption in the US. Already its too expensive for people in Mexico and being a major ingredient in their diet, thats having an inflationary effect on their lifestyle.

Rather than using corn-based ethanol, I wish the government would look into using vegetable oil instead. There are several kits available for diesel cars that allow the owners to switch to “used” vegetable oil whenever its available. In Southern California, there are companies like Socal Greasers that will fit your diesel car with a converter kit for a reasonable price.

So next time you stop by a fast-food place for a meal you can ask the manager for some of their used cooking oil. They have to pay to dispose of it and are usually happy to give it to you for free. It burns much cleaner than gasoline and your exhaust has a nice french-fry smell too! The BMW just unvieled it’s new concept car, and its rumored to be the new 8-series. Very nice!

The CS feels like an evolution of that philosophy with sharper edges and swoopier surfaces all around. Underhood we’ll find a 6.0-liter V12, which is essentially the M5 5.0-liter V10 with two extra cylinders. That’s a nice modular motor for BMW if that ends up being the case, with 10-cylinder, 12-cylinder, and V8 versions used across the Motorsport models

Ok, who wants to buy me a new BMW? Ferrari just came out with its new 620 hp 599 GTB. It kind of looks like the Jaguar XKR pictured  below!

Only its probably around $195,000 more expensive and has 50% more horsepower. 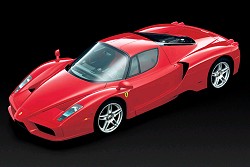 While blogging about saving money, making money and living frugally is all very fine, the whole idea is to get so damn rich you can buy any old crap you want. The object of my desire is the Ferrari Enzo. Only 350 were made and it costs around $700,000. While pretty ugly from certain angles, it looks like a space ship and packs a whopping 660 horses. Ferraris are expensive to maintain and require a transmission overhaul every 40,000 miles. So you have to be really really loaded in order to afford one. [Notice I said afford and not buy].

Something a little more affordable and probably just as much fun to drive is the new BMW M5. It packs 400 horses but at the touch of a button magically changes to 500! It won the highly covetted Internation Engine of the Year Award and costs a more affordable $85,000. Of course I won’t be buying one of these pretty soon [although my CPA might]. This should be more fun to drive than the Transporter’s 7 Series!

My next car is probably going to be the ultra cheap and fuel efficient Toyata Yaris which costs under $12,000 and gets upto 40 miles/gallon. However, if the wife will permit I may forgo this in order to get the new Dodge Charger. For $30k, you get a V8 hemi with 340 hp and 25 highway miles to the gallon! Now that should be fun to drive.

May be I’ll just have to make do with one of those bright red Ferrari Jackets for now!